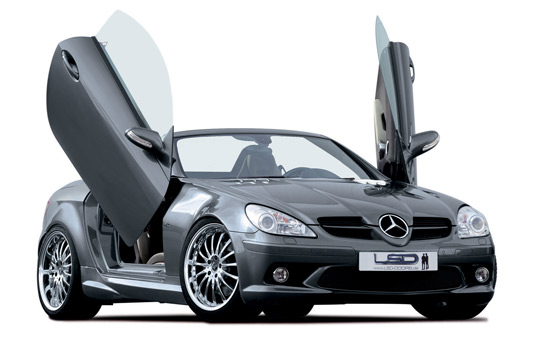 Door hinges from LSD, allowing conversion of the original vehicle doors to wing doors, are becoming increasingly popular. LSD has further improved the mechanism and has now ensured even more opening precision and safety.

All LSD door fittings produced from the end of 2007 have the new Guided Roller System (GRS). To guarantee precise opening and closing of the door, the entire movement range of the pivot arm is prescribed in every position by the two-dimensional adjustment possibility with the roller guidance of the roller bearing integrated in the hinges.

In the GRS+ version used in specific applications by LSD when space permits, the pivot arm is supported by another mechanism, guaranteeing additional stability, when it is in the opened position. The mechanism consists of a catch which only locks in fully-opened condition. LSD door hinges equipped with GRS+ are marked with a ”Z” in the remarks column in the LSD catalog.

One thing remains unchanged with the Guided Roller System: the crash-tested (safe according to Directive 96/27/EC), easy to fit LSD wing door hinges endow every vehicle with sensational looks and are the ideal solution for all lovers of exceptional tuning and show cars. LSD door hinges are available direct from LSD or specialist dealers.

All information and an always up-to-date application list can be found at www.lsd-doors.de. 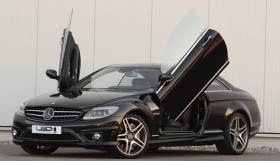